An ounce of prevention is worth a pound of cure...

Born with the spirit of God to help others

Background: Visionary International founder, Brenda Y. Thomas, started Visionary International in January 2013 based on a vision I had to help my older and only brother, Elmer D. Conner, Jr.  In the fall of 2012, Elmer, 58 years old, was diagnosed with stage 4 liver cancer which spread to pancreatic cancer. Prior to his diagnosis, Elmer enjoyed a joyful and active lifestyle.  After the diagnosis, his health deteriorated rapidly, but he vowed not to undergo the grueling and painful treatment of radiation and chemotherapy.  Shocked by the news of my brother’s illness, I  was determined to discover natural and homeopathic remedies to heal his cancer, and my vision was born.

My husband, Anthony Thomas and I started our journey in Hong Kong, China in November 2012 in search of non-traditional remedies to cure cancer.  We had learned that the Asian culture has a lower cancer rates. Curious to learn more, we began our research and discovery in Hong Kong, home of Taoism, Buddhism and Confucianism. Once there, we visited several temples in Hong Kong, including the famous Wong Tai Sin Temple.  The Taoist temple is famed for many prayers being answered. What you request is what you get via a practice called kau cim.  We prayed and asked God to assist us in our journey for natural cures for cancer.

After leaving the Wong Tai Sin Temple, we met a Central Universe Medical & Health Care Pharmacist close to the temple. The pharmacist informed us of a mushroom research performed at Poly Technic University in Hong Kong. The Tiger Milk Mushroom (1), originally from Africa, is said to be a natural cancer remedy. The mushroom contains a polysaccharide-protein complex (PSP) that turns selenium, a common nutrient, into a new cancer therapy, especially for breast cancer patients. We continued our journey to Bali, Indonesia, met several local Indonesians and learned of other natural remedies such as White Turmeric for degenerative diseases, including cancer and tumors. We also learned of Zeolite (2), maple syrup and baking soda and Red Fruit Oil. 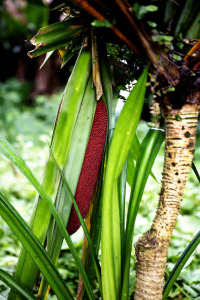 After returning from Hong Kong and Indonesia, I  was faced with another disappointment, Anthony, my husband, was diagnosed with prostate cancer and Monoclonal Gammopathy of Undetermined Significance (MGUS) (3).  I was even more determined to continue my quest and vision.  So  I took a leap of faith and after tireless hours on the internet and email correspondence with contacts in Hong Kong and Indonesia, I came across a natural fruit called Minyak Buah Merah Red Fruit Oil, scientifically known as Pandanus Conoideus. We were very excited and finally believed that we had found a promising treatment to defeat cancer.

Elmer passed away on December 14, 2012 before I could get my hands on Red Fruit Oil.  I vowed even more to discover a natural remedy for cancer for Anthony and others like him. One day I met Samuel Nehemiah, a businessman in Indonesia over the internet, who was excited to tell us how Red Fruit Oil helped his uncle. Samuel’s uncle was diagnosed with liver tumor and the doctor pronounces that his uncle will not live past three months. His uncle started taken Red Fruit Oil in February 2012. After two and 1/2 years, Samuel’s uncle cancer is not active, but the important matter is Red Fruit Oil has helped his condition not to become worse, and has already extended his life for years.  Anthony and I would spend the next year learning about Red Fruit Oil from Samuel.

Like Elmer, Anthony also vowed not to take radiation or chemotherapy to treat his cancer. He decided to trust in God, change his diet, and take three tablespoons of Red Fruit Oil three times a day.  After twenty months of observing Anthony through biopsy and laboratory blood testing, the Naval National Military Medical Center dismissed Anthony from the Hematology/Oncology clinic. His Monoclonal Gammopathy test results showed that his antibodies had returned to their normal levels.  Anthony’s news and improved quality of life, gave him and I the confidence and urgency to start Visionary International, LLC to allow others to have access to the remarkable product, Red Fruit Oil.

(2) Zeolites are a group of natural mineral substances that contain mainly hydrated aluminum and silicon compounds, which has the rare ability to take in a tremendous amount of positively charged toxins, indirectly neutralizing cancer causing effects.

(3) MGUS a common condition in which M-protein is present, with no tumors or other symptoms of disease. MGUS affects white blood cells known as plasma cells, which produces special proteins, known as antibodies or immunoglobulins. These antibodies circulate in the blood, and attack viruses and bacteria that may be present in the body. When an abnormally large amount of one particular antibody is produced, this is called monoclonal gammopathy.

Mobile Friendly – On the Go!